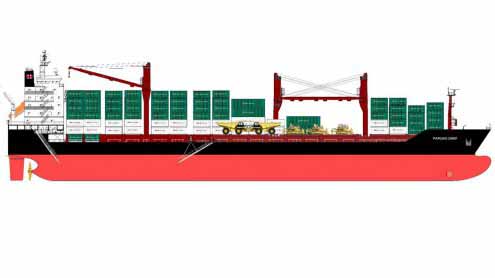 The vessels are scheduled for delivery in late 2014 and first quarter 2015 and the contract includes options for an additional 2+2 vessels.

CNCo is the deep-sea ship-owning and operating arm of the Swire group of companies and is wholly-owned by the group’s parent company, John Swire & Sons. The new vessels will operate for Swire Shipping’s liner division, trading between Australia and Papua New Guinea; they have been specifically designed to meet the particular demands of this trading route. CNCo says the ships’ design focuses on cargo handling speed and fuel efficiency; they will offer maximum versatility, with the capability to carry a wide range of cargo including breakbulk, over-dimensional and heavy-lift project cargoes up to 120 tonnes, in addition to meeting the route’s general cargo requirements.

“The cranes’ enhanced efficiency is mainly attributable to faster and more accurate load positioning which reduces the time spent in port, along with a 30 to 35 percent reduction in power consumption compared to electro-hydraulic cranes,” says Svante Lundberg, Sales Manager for MacGregor cargo cranes. MacGregor hatches, cellguides and fixed fittings solution combines cargo areas with hydraulic folding hatch covers both on weatherdeck and tween deck with areas of lift-away hatch covers on weatherdeck and cellguides in hold.  This arrangement creates unique cargo handling solution by offering versatile cargo stowage options for these ships.

“We have enjoyed a successful working relationship with CNCo over a number of years,” says Mr Lundberg. “CNCo pioneered the use of our electric cranes and this new order builds on several new ship series to feature our efficient cargo handling equipment.”

CNCo also has a series of twelve 39,500 dwt bulk carriers under construction at Chengxi, in China. These vessels will be equipped with 48 electrically-driven bulk versions of MacGregor VFD cranes. In 2011, Cargotec received orders from CNCo for electric cranes, hatch covers, cellguides and fixed fittings for eight multi-purpose (S31 Class) 31,000 dwt vessels currently being built at Zhejiang Ouhua Shipbuilding, scheduled for delivery by August 2013.