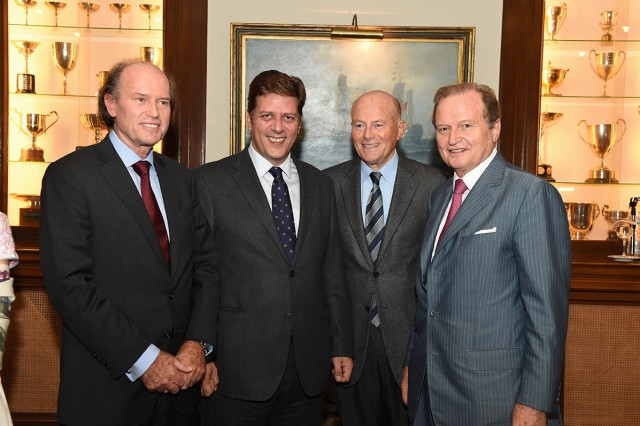 Tsavliris Salvage celebrated its new venture in China with its Chinese partners, Kamji Marine International, hosting a special Reception at the Yacht Club of Greece on Tuesday, 18 November.

Guests were able to absorb the stunning views and also enjoy the excellent Oolong teas from China before the Cocktail Reception.

Guests included the Minister of Shipping, Maritime Affairs and the Aegean, Mr Miltiades Varvitsiotis and the Commercial Counsellor of the Chinese Embassy in Greece, Mr Liwei Sun, as well as many notable figures from the Greek Shipping Industry.

Tsavliris partners, Kamji Marine Group, were in attendance,  visiting all the way from Zhoushan – China.  The delegation included the head, Mr Johnny Ma, his colleagues and family members. The event celebrated the successful cooperation and relationship with Kamji Marine, which comprises a reliable, efficient and talented team with considerable experience in marine services in China.  Impressively, they are one of China’s leading registered Ship Pollution Response Organisations (SPRO).

It was highlighted at the event  that the Chinese government passed new Regulations for the Prevention and Control of Marine Pollution from Ships. As from 2012, the Regulations contain a requirement that shipmanagers pre-contract with an approved Ship Pollution Response Organisation prior to the ship arriving in China.

The exclusive partnership between Tsavliris Salvage and Kamji Marine, will serve the Greek shipping industry, assisting Greek controlled ships calling at Chinese ports. Moreover, in the unlikely event of a casualty in Chinese waters, shipowners will have the peace of mind in knowing that Tsavliris Salvage will be available to provide input whether it be in an operational, advisory or technical capacity, to ensure that the level of service they receive is nothing short of first class.  In turn, Kamji Marine Group dealing with the Chinese coast guards and port authorities will openly communicate with Tsavliris to ensure Greek ship-owners are kept abreast of the local situation.

Minister Miltiades Varvitsiotis welcomed the new venture between Tsavliris Salvage and Kamji Marine and stressed the importance of such trans-national collaborations.  He also highlighted the significance of shipping and companies like Tsavliris Salvage to the Greek economy, maritime safety and the environment.

Mr Liwei Sun, from the Chinese Embassy, emphasized the importance of the interaction between China and Greece and how such relationships need to be taken further forward.

In his welcome speech, Mr Nicolas A. Tsavliris explained that “the working relationship with Johnny Ma began in 2012 when we received his excellent support during a substantial salvage operation in China. Following on from that successful collaboration, in 2013 a partnership for SPRO services was formed”.

Mr Tsavliris continued: “We, at Tsavliris Salvage are very proud that we can continue to serve the Greek shipping community, as we always have with great passion.  In addition to our presence in Greece, the UK, the USA, Cyprus, Turkey and Brazil –  with this new partnership we have expanded into one of the world’s most important markets – China.   With our partnership we cement our presence there and continue to grow and expand so as to meet the needs of our clients and colleagues in shipping.”

On behalf of Kamji Marine, Mr Johnny Ma thanked Tsavliris Salvage for their warm hospitality and expressed his delight with his new partners. He invited Greek shipowners to utilise the high quality services provided by this new venture when their vessels come in China. He explained that Kamji Marine can not only render routine marine services, but also solve issues with Port State Control and other port authorities in China.

Mr George A. Tsavliris thanked Tsavliris Salvage staff for their devotion and contribution to the company’s success, emphasising especially the role of Captain George Polychroniou in formulating the Tsavliris – Kamji partnership.

Mr Andreas A. Tsavliris later mentioned how important and useful these services are for Greek shipowners and offered some special presents to all Chinese delegation members.