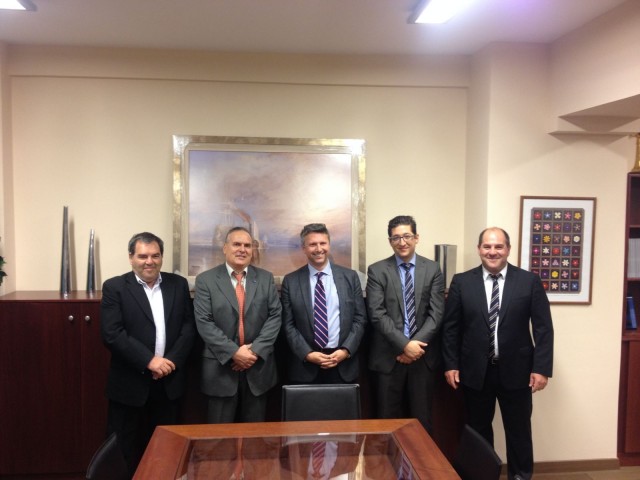 A genuine copy of The Fighting Temeraire of J. M. W. Turner was presented by Hellenic Lloyd’s SA to the Spanopoulos Group on the occasion of the inauguration of the new shipyard of the Group at Perama. The present was handed to Messrs. Ignatios and Michalis Spanopoulos during a press event organised at the shipyard’s new facilities on Wednesday the 29th of October.

“We cordially thank Hellenic Lloyd’s for their inspired present, whose symbolism is deeply appreciated by my family. As you all know the Spanopoulos Group started some 30 years ago with tugboats. We will secure a special place in our new shipyard to display this distinct artwork”, said Michalis Spanopoulos.

The Fighting Temeraire tugged to her last berth to be broken up, 1838 is an oil painting by the English artist J. M. W. Turner, a Romantic landscape painter, water-colourist, and printmaker. Turner was considered a controversial figure in his day, but is now regarded as the artist who elevated landscape painting to an eminence rivalling history painting. The Fighting Temeraire was painted in 1838 and exhibited at the Royal Academy in 1839. It depicts one of the last second-rate ships of the line which played a distinguished role in the Battle of Trafalgar in 1805, the 98-gun ship HMS Temeraire, being towed by a paddle-wheel steam tug towards its final berth in Rotherhithe in south-east London in 1838 to be broken up for scrap. The painting hangs in the National Gallery, London, having been bequeathed to the nation by the artist in 1851. In the year of the Trafalgar bicentenary and SeaBritain 2005 celebrations, ‘The Fighting Temeraire’ has been voted the ‘Greatest Painting in Britain’ in a public poll.

“It is unique for a tugging theme to have received appreciation to the extent JMW Turner’s Fighting Temeraire had. The achievements of the Spanopoulos Group in the field and the tugging of the HMS Ark Royal to her final berth by a Spanopoulos tugboat inspired us to select this famous historic theme”, said Theodosis Stamatellos, Lloyd’s Register Area Manager GEMA.

The new Spanopoulos Group shipyard has been fully operational since February 2014 and has created many employment opportunities in the area. The 16,500m2 site is dedicated exclusively to luxurious mega yachts providing an array of in house services under the high standards certification for ISO 9001, ISO 14001, OHSAS 18001, ISPS as well as high liability insurance.