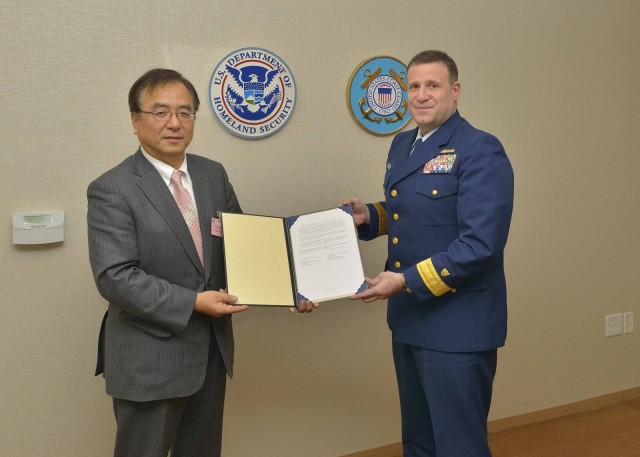 The world’s largest classification society ClassNK announced that it was granted expanded authorization from the United States Coast Guard (USCG) on 25 December 2012, and will now be able to carry out a full range of surveys for the SOLAS, MARPOL and AFS conventions, as well as ISM Audits on behalf of the United States flag administration.

The announcement was made following a visit by ClassNK Executive Vice President Dr. Takuya Yoneya to USCG Headquarters in Washington D.C. on 7 January 2013. During the visit Dr. Yoneya expressed ClassNK’s appreciation for the recognition and exchanged signed copies of the authorization agreement with USCG Rear Admiral Joseph A. Servidio. Including this authorization from the USCG, ClassNK is now authorized to carry out statutory surveys on behalf of 106 flag administrations.

ClassNK, which opened its first office in the United States in 1962, has primarily focused on the international shipping or “blue water” sector of the American shipping industry. However, in order to address growing demand for high quality certification services from domestic shipping lines, ClassNK began working with the USCG to expand its authorization to cover U.S. flag vessels and earned USCG authorization to carry out certification for the Load Line (LL) and Tonnage Measurement Conventions (TM69) in 2011. The expansion of recognition by USCG to cover SOLAS, MARPOL, and ISM among other conventions now makes it possible for ClassNK to issue a wide range of certifications for U.S. flagged vessels in every part of the industry.

Following the announcement of expansion of USCG authorization, ClassNK Chairman and President Noboru Ueda highlighted the importance of the United States maritime industry, saying: “America is among the world’s top nations in terms of both vessel numbers and tonnage, and the industry here is incredibly dynamic, including not only major charterers but also an incredibly diverse shipping community that includes not only blue water shipowners but also inland brown water shipping, coastal shipping, and the offshore sector.”

“At ClassNK we have served the American blue water shipping community for more than 50 years now, but with this authorization from the USCG we will now be able to greatly expand our operations to include coastal, gulf, and inland shipping, as well as the growing offshore energy and wind sectors.

“Both blue and brown water shipowners and operators face a number of new challenges related to new environmental and safety regulations, and with the this recognition from the USCG, we will now be making significant additions to our survey network and human resources in America in order to better support the maritime industry throughout the United States.”