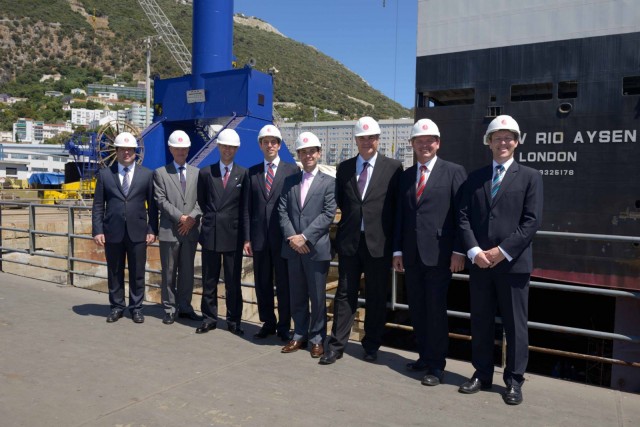 As part of a three day Royal tour of Gibraltar in June, HRH The Prince Edward, Earl of Wessex set time aside to inspect work under way at Gibdock, the territory’s strategically located repair and conversion yard.

The Earl’s visit included a presentation by the yard’s management of facilities, references, market performance and production service capabilities, and acknowledged Gibdock’s industry certification on quality, health, safety and the environment, before a tour of the yard.

The tour included a walk down to the bottom of No. 1 Dock to inspect preparations to work on the vehicle carrier CSAV Rio Aysen, owned by Ofer Brothers Group and managed by Zodiac Maritime. The 183m long, 32m beam ship arrived in Gibraltar on June 7th for a routine repair and maintenance job, and required careful manoeuvring into the 38m wide No. 1 Dock.

“The Jubilee visit comes at a particularly interesting time for the shipyard, where the current diverse workload in new and established market sectors has sustained activities at Gibdock through an extremely challenging economic period,” said Mr Corvelli. “Already this year we have undertaken some prestigious value-added jobs, including extensive repair work on the German-owned containership Westerburg and the high profile Norwegian-owned offshore accommodation vessel Edda Fides, which docked for the first time in early April.”

The Earl, who met 20 workers and tradesmen allotted to Dock No. 1 for the first stages of the Rio Aysen work, then moved on to review progress on the Jubilee Hope, a former Royal Navy Fleet tender that is being transformed by Gibdock into a floating medical centre, to serve on Lake Victoria, Tanzania. Work on the Jubilee Hope is on behalf of Gibraltar-registered charity, The Vine Trust, and represents Gibraltar’s contribution to the Jubilee celebrations.

The Vine Trust Project Director, Peter Hall, was in attendance to explain the aim of the project to deliver a vessel which will benefit more than one million patients over the next 25 years.

“This conversion provides an opportunity to make a crucial difference to those most in need in a major member of the Commonwealth,” said Mr Corvelli. “We believe that the wider community in Gibraltar will join us in giving something back and I hope that local volunteers will give up two weeks of their time to go to Tanzania as part of efforts to help over 100,000 patients each year.”