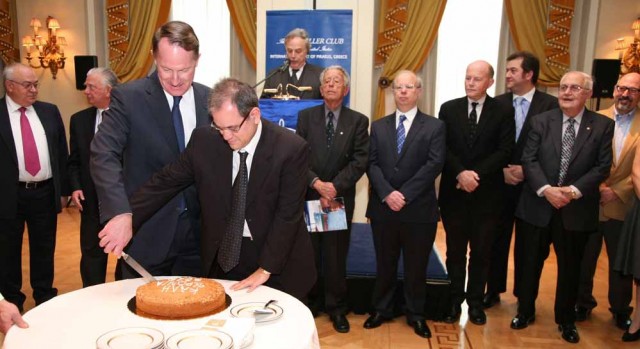 The traditional New Year Pitta cutting ceremony was celebrated on Sunday 29th January 2012 at the Grande Bretagne Hotel and more than 180 distinguished guests and members of the International Propeller Club of the United States, International Port of Piraeus, were gathered. The ceremony was honored by the presence of Minister of Development, Competitiveness and Shipping, Mr. M. Chrisochoidis and H.E., Ambassador of the United States in Greece, Daniel Bennett Smith.

Minister of Development, Competitiveness and Shipping, Mr. M. Chrisochoidis, in his speech highly stressed the role of Maritime education in Greece and the importance of its reinforcement of the shipping in general now days.

Afterwards, Mrs. Despina Foros-Tsirozidis, 2nd Vice President of the Propeller Club, announced the presentation of award to Mrs. Marianna Moschou in recognition and appreciation as Secretary General of the International Propeller Club and of her untiring contribution to society as President of ELEPAP.

Mrs. Moschou upon receiving the award noted, ‘Volunteering with professionalism and commitment and eagerness for teamwork nowadays more than ever before is necessary for Greece.’ She went on by saying that ‘[one gives and takes] back immense satisfaction and fulfillment’.

His Excellency, Ambassador of the United States in Greece, Daniel Bennett Smith welcomed the audience and referred to the custom of traditional vasilopita cutting who along with the Board of Governors and Past Presidents of the Propeller Club cut symbolically the New Year Pitta.

Mr. Apostolos Doucas, Regional Vice President of the International Propeller Club, made the announcement of the yearly ‘MARIA P.TSAKOS’ scholarship and invited Cpt. Panayiotis Tsakos, Founder of TSAKOS Group, to make the award. The receiver of the Scholarship, Mrs. Irini Mylona, graduate student from Livaneion Lyceum of Kardamyla, Chios, made a short speech thanking her supporters for embracing such initiatives which contribute to the promotion of education.

The ceremony was followed by the exquisite dancing group of the American College of Greece and buffet reception.