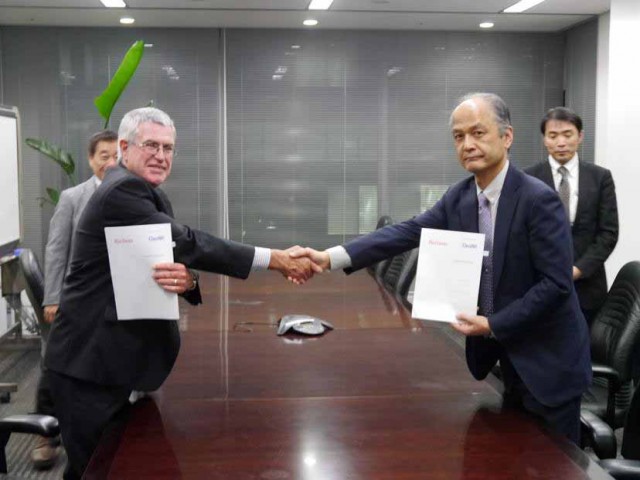 Leading classification society ClassNK and Rio Tinto Iron Ore (part of the Rio Tinto Group, one of the world’s largest metal and mining companies), announced that they have signed a collaborative agreement focused on the safe carriage of iron ore.

The agreement was signed at a ceremony held after a meeting of executives from both companies at the Rio Tinto Japan office on 3 December 2013.  ClassNK Executive Vice President Yasushi Nakamura and Warwick Smith, Managing Director, Sales and Marketing for Rio Tinto Iron Ore, signed the agreement on behalf of their respective organizations.

The agreement signed between ClassNK and Rio Tinto Iron Ore provides the framework for cooperative research on safe maritime transport of iron ore.

After the signing ceremony, ClassNK Executive Vice President Yasushi Nakamura said, “Both Rio Tinto and ClassNK have decades of specialized knowledge and expertise related to the maritime transport of solid bulk cargoes. By signing this agreement we hope to share this rich history and knowledge to benefit the entire maritime community.”

Mr. Smith joined Mr. Nakamura in highlighting the importance of the agreement, saying, “This agreement realises mutually beneficial collaboration with one of the leading classification societies, and I hope it will expand into a wider range of cooperative research on maritime safety of other products shipped by the Rio Tinto Group”.

ClassNK support for the project is being carried out as part of its Joint R&D for Industry program, which has provided funding and research support for more than 250 joint maritime R&D projects since its inception in 2009.