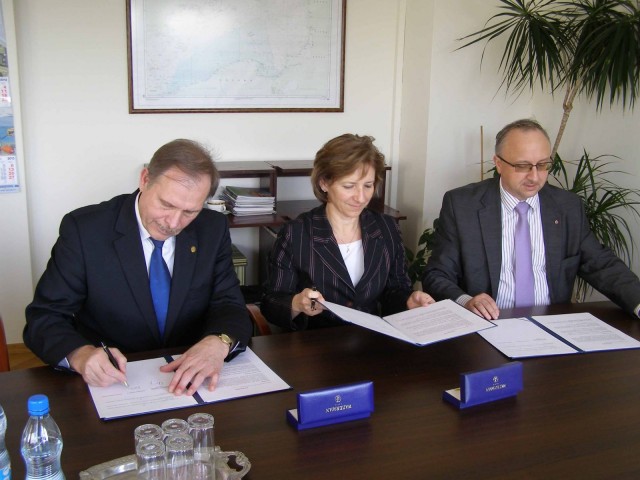 Representatives of POLSTEAM and Polish Register of Shipping met in the Polish Ministry of Transport, Construction and Maritime Economy on 21 November 2012 to sign an agreement on PRS supervision of four big bulk carriers constructed for POLSTEAM by the Japanese shipyard Tsuneishi .

The Shipowner decided on exclusive PRS classification supervision of its new tonnage soon to be launched. To demonstrate this decision it was agreed to conclude an agreement in advance.

Paweł Szynkaruk, POLSTEAM General Director and Jan Jankowski, PRS Management Board President signed the agreement in the presence of Anna Wypych-Namiotko, Undersecretary of State in the Ministry of Transport, Construction and Maritime Economy.

The celebratory circumstances of signing the agreement emphasize the success of the POLSTEAM and the Polish maritime economy.

With the construction of the series of four kamsarmax bulk carriers (82 thousand dwt each) in the Japanese shipyard Tsuneishi Polish Steamship Company terminates the 2005 launched fleet renewal program to expand its fleet by forty-two new ships to the end of 2013. Their total capacity will be approximately 1.7 million dwt.

By mid 2012 the Szczecin based Shipowner launched 38 ships (four series)  built in Chinese shipyards in Tianjin by Xingang Shipbuilding Heavy Industry, in Nantongu by Mingde, in Jingjiang by New Times Shipyard and in Taizhou by Sanfu. The kamsarmaks concluding the project are to be named „Karpaty”, „Sudety”, „Beskidy” and will be all commissioned by the end of 2013.

Fleet renewal is a noteworthy achievement of the biggest Polish shipping company and the Polish State and its maritime economy.

Similarly the EU granted recognition of Polish Register of Shipping in terms of technical supervision of seagoing vessels in 2006 (since 2009 full recognition for all ship types and sizes subject to international conventions of operations at sea) is a success of Polish maritime economy as is the revived membership of PRS in the International Association of Classification Societies (IACS) in June 2011. PRS renewed membership in IACS coincided with the Society’s 75 anniversary. The government supported both PRS application for EU recognition and the return of PRS to IACS.

PRS supervision of the newest POLSTEAM bulk carriers, the biggest in its fleet, shows the intension of developing the cooperation between two Polish entities, dating back to the establishment of POLSTEAM in 1951, to the benefit of both parties and the Polish economy. For POLSTEAM this means facilitated servicing of its fleet both in terms of class and statutory surveys and for PRS prestige and further development potential.

Polish Register of Shipping has the capacity to ensure full and effective supervisory services of POLSTEAM bulk carriers having extensive competence and experience in safety issues of these types of vessels.