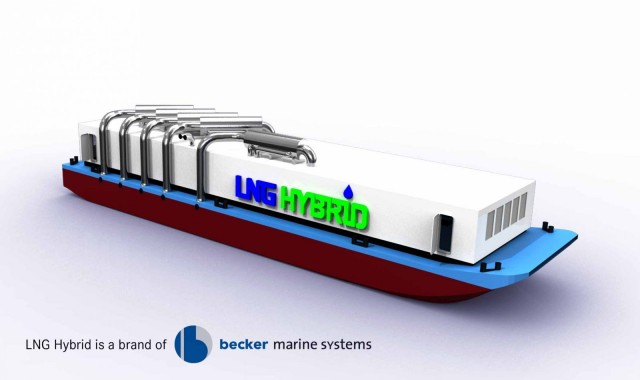 Currently, cruise ships lying in port generate the energy required for on-board operation by using the ships’ on-board diesel engines. The use of these engines results in a high level of pollution containing harmful and airborne substances in the form of soot particles.

The new concept solves this problem by producing energy on the floating LNG Hybrid Barge from environmentally-friendly liquefied natural gas (LNG) by means of 5 generators coupled to combined heat and power engines. The power generated can be fed into the supply grid of the cruise ship as needed. The liquefied natural gas is delivered in modular form, because this is less expensive than bunkering. A LNG Bunker Station, ensuring supply at all times, is being built in Brunsbüttel by SCHRAMM group GmbH & Co.

KG. Schramm group will also be the operator of the LNG Hybrid Barge at the Hamburg port.

The use of the LNG Hybrid Barge will significantly reduce particle emissions during port sojourns. In contrast to the diesel engines currently in use, sulphur oxides (SOX) will no longer be produced during port layovers. The emission of nitrogen oxides (NOX) will be lowered by up to 80 % and the output of carbon dioxide by an additional 30 %.

Another benefit is the year-round utilisation of the system. The Hamburg energy provider, EON Hanse Wärme GmbH, is planning to feed the energy produced in the cruise off-season into the municipal grid, thus supplying electricity and heat to approx. 11,000 households (based on 4-person households).

In autumn 2013 the AIDAsol should be the first cruise ship in the world to be supplied with electricity by Becker Marine Systems’ LNG Hybrid Barge at Hamburg’s HafenCity.