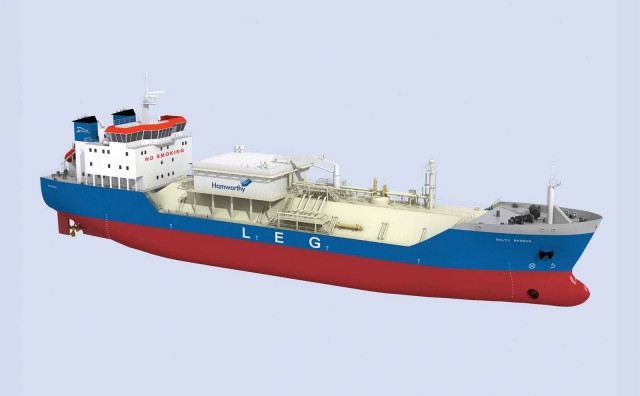 Hamworthy Oil & Gas Systems has continued the major advance in China’s broadening gas carrier construction sector by securing more contracts for delivery of complete cargo handling systems to two liquid ethylene gas (LEG) carriers to be built at Sinopacific Offshore & Engineering Co. Ltd (SOE) in Nantong.
The 12,000m3 capacity, 139m long semi-pressurised and refrigerated LEG carriers, will be incorporated in the ongoing project for the construction of six ships ordered by Luxembourg-based Jaccar Holdings/Eitzen Ethylene Carriers. The owner is to operate under a new name, Evergas, and the new ships will be built in accordance with Sinopacific’s ‘Tiger’ design. Delivery is scheduled from this year onwards.

The contract follows systems for the first six LEG carriers in the ‘Tiger’ series Hamworthy signed with Sinopacific towards the end of 2010. Scope of delivery for the newbuildings again covers engineering and the supply of cargo handling systems, including reliquefaction plant and Hamworthy Svanehøj deepwell cargo pumps.

The onboard cargo handling systems are designed for high flexibility cargoes as the vessels have to be capable of transporting LEG at temperatures down to minus 104 °C.

“China is a leading country in the new contract market and, increasingly, it is investing more in vessels for gas transportation,” said Stein Thoresen, Hamworthy Oil & Gas Systems, LPG Business Unit Director. “We see this innovative project as a very significant reference for Hamworthy in the gas ship market in China.”

Each of the vessels meet exacting hull efficiency and reduced fuel consumption requirements, are conferred with  ‘Green Passport’ notation by Class, and comply with  provisions set out in the Maritime Labour Convention 2006 for crew accommodation, which is due to enter into force during or after 2012.