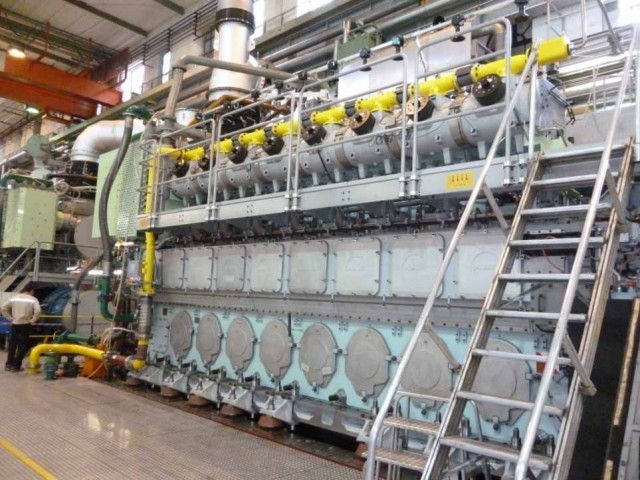 MAN Diesel & Turbo has won the contract to supply the engines for six Chinese LNG carriers (LNGCs). The order for the 30 × MAN 51/60DF dual-fuel engines is a significant development for both Chinese shipyards as well as the LNGC market.

The configuration for the new order covers 5 × 8L51/60DF engines, all of the engines are IMO Tier II-compliant in diesel mode and will have lower exhaust-gas emissions in gas mode than IMO Tier III stipulates – fuel-sharing mode will be applied to each unit.

The customer is a consortium, formed by Sinopec Kantons, MOL and Shanghai-based CSLNG, a daughter company of China Shipping.

Each newbuilding will have a payload of 174,000 m³ and be DFDE (dual-fuel diesel electrical)-driven, providing the customer with the optimum redundancy. The vessels will be the first large LNG carriers with a DFDE configuration built in China.

The vessels will be constructed at Hudong-Zhonghua Shipyard located in Shanghai at the Jiangnan Changxing Production Line No.1, now the responsibility of Hudong, following parent group China State Shipbuilding Corporation’s (CSSC) re-organisation of production facilities. When delivered, the ships will load LNG in Gladstone, Australia for a number of Chinese import terminals – Qingdao, Beihai, Tianjin, Lianyungang and Wenzhou. Steel cutting on the first ship will be in January 2014. The sixth ship will be delivered in the fourth quarter, 2017. MAN Diesel & Turbo reports that the engines will be designed and built at its Augsburg works in southern Germany.

Fuel Sharing Mode (FSM) describes the operation of a dual-fuel engine with a mixture of fuel gas (NG, NBOG) and fuel oil (MGO, MDO or HFO) at a certain ratio. All cylinders operate at the same fuel-sharing ratio simultaneously. MAN Diesel & Turbo’s Erwin Boijmans, Sales Manager – Marine Medium Speed business unit, based in Augsburg said: “This order is yet another success for the 51/60DF’s fuel-sharing capability, a special feature and one of the reasons we have especially focused on LNG carrier applications with the 51/60DF unit. This Chinese order comes on the back of another milestone LNGC order with the same configuration we recently landed in Japan and augurs well for the future.”