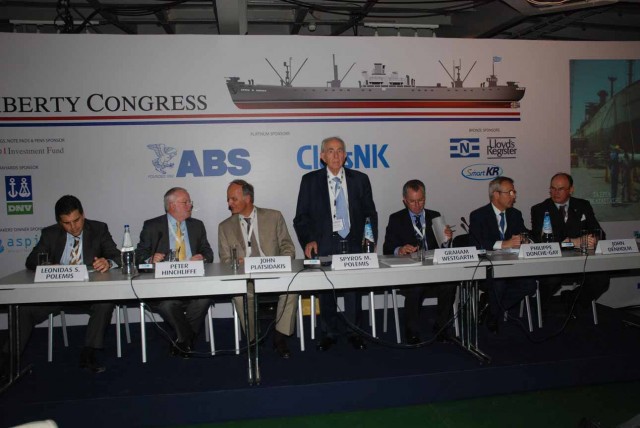 The maritime industry does not need speak with one voice so much as to deliver one message.

To achieve this all sectors of the shipping industry have to improve cooperation between themselves and work together. Shipping is an over-regulated industry and much of the blame for this lies with the industry, which has allowed the regulators to have pretty much a free hand and the time has come to declare, “enough is enough”.

“We are the biggest industry in the world and it is time it was realised that without shipping half the world starve and the other half freeze,” said Spyros M Polemis, when as chairman he launched The Liberty Congress, June 20.

Since its arrival in Piraeus, in 2009, the restored HELLAS LIBERTY has helped foster all which is good in shipping, playing host to events and visitors with an affinity to maritime industry and its traditions. One of the last three surviving Liberty ships which played such an important part in re-laying the foundation of Greek shipping after the Second World War, the HELLAS LIBERTY was therefore the perfect location for a powerful group of shipping leaders to discuss with the Greek shipping community ways of enhancing cooperation and sharing responsibility amongst all stakeholders so as to improve the quality of service and the image of the shipping industry.

Led by Mr Polemis, former chairman of ICS and president of ISF, more than 220 delegates registered for the 1st Liberty Congress, which mixed presentations with four lively hour-long Q & A sessions. Nearly 12 hours of discussion took place during the day.

After opening remarks by Mr Polemis and a keynote address by Efthimios E Mitropoulos, Imo secretary general Emeritus, presentations were made by the chairmen of IMIF, The Baltic Exchange, Bimco, Intertanko, Intercargo, IACS and the chief executive officers of banks, shipping companies, shipbrokers, law firms and senior classification personnel.

Under the general theme ‘enhancing cooperation and sharing responsibility’, Mr Polemis said “we have done much to improve quality” but “claims, disputes, and bad publicity” still abound.

“It’s time we say enough is enough. Governments have to do their part by deeds not just words,” said Mr Polemis.

Mr Mitropoulos noted “the nature of the business forces competition between those in it”. He emphasised the key to the industry’s strength is coordination and cooperation and this can be achieved through the Imo. He warned however, “a group attitude could hurt Imo”.

Mr Mitropoulos also pointed out much has been done to improve the image of shipping, but said, “my word is my bond is in danger”.

IMIF chairman, Jim Davis said, “shipping people are still entrenched in their own ideas. He said shipping must ensure its rightful place in the world, but warned cargo owners “are looking closely at the cost of transportation” hence the entry into ownership of charterers. He said there is a way out of the present shipping crisis, “but it will be painful”. “We can not longer push the problem back. We must fully realise the position is in a mess and we have to get out of it,” Davis told the forum.

Alexandros Tourkolias, ceo National Bank of Greece, also delivered a message of “the need for cooperation in a time when changes and adjustments have to be made”. He expressed doubts about the ability of some shipbuilders and their drive to win orders. “Banks and bankers do not pay too much attention to the shipbuilder, and I believe in the years to come we may regret building these ships because of their quality,” said Mr Tourkolias.

Shipowner, George Gourdomichalis, chairman, G Bros Maritime, was one to noting an absence of charterers among delegates, claiming, “they just want a cheap ship” and are “not prepared to share any risk”. “They even want to put their own guards on board,” he said while calling for more transparency on the part of charterers, who are now seeking to become shipowners.

David Beard, senior director SSY, said owners have allowed charterers to put conditions in charter parties when allow them to “build a ring of steel to protect themsevles”. He agreed charterers have been able to do this, because of the state of the market.

With speaker after speaker pointing out charterers seemingly turned down an invitation to the forum, and shipyards also took a similar line, Baltic Exchange chairman, Quentin Soanes, suggested owner bodies like Intercargo and Intertanko should “set up a vetting scheme for charterers”.

Manolis Vordonis, former executive director of Thenamaris Ships Management noted the forum “was a very different gathering to the usual industry event”. While charterers were coming in for considerable criticism, Mr Vordonis said the ship’s master, the crew and the managers should cooperate with the charterers, so that all aspects of the voyage are executed as efficiently as possible.

As the forum proceeded, it became evident delegates felt the need for shipping to speak with “one voice” was not as important as “to deliver the same message”.

The fragmented nature of the industry “does not work in our favour,” said Graham Westgarth, Intertanko chairman. “We need to adopt common positions on key issues, not amalgamate. When issues arise we should develop a task force and call on expert advice to work as one.”

Bimco president, John Denholm, said politicians are “not against shipping”, they “just lack experience”. “The industry should supply the knowledge and engage with politicians early and with energy if we are to stop this flow of well-intentioned regulation,” said Mr Denholm.

John Platsidakis, chairman of Intercargo, saw different views as being “vital”, but said “we need to work together, not in conflict”.

ICS secretary general, Peter Hinchliffe, said regulators expect the industry to speak with one voice, because “ultimately when the industry is united better results are achieved for the common good”.

Dirk Fry, president Columbia Shipmanagement, outlined the philosophy of the Prompt Payment Code, which he said “is about encouraging and prompting best practice between organisations and their counterparties”. Mr Fry explained the PPC was established in 2009 and that now there are more then 1,500 companies signed up to it. Indeed, before the forum closed, Mr Fry was seen in discussion with interested Greek service companies wanting to know more about PPC. More about PPC is available at website:

Philippe Donche-Gay, head of Marine & Offshore Division, BV, said it was up to ship owners and class to work together with Imo regarding the application of rules and regulations, with the goal of “ensuring a level playing field within the shipping industry”. He said through Imo the industry could work to ensure agreement on sensible rules and assist in developing programmes for preventing PSC detentions for quality shipping.

Kirsi Tikka, president, ABS, Europe said an industry which embraces cooperation and sharing of responsibility, would result in a raising of standards “by raising awareness among industry stake holders” and this would “ultimately have an impact on the quality of the ship and the quality of the service”.

Though, like charterers, shipyard representatives were thin on the ground, Stavros Hatzigrigoris, md Maran Tankers Management, called for cooperation at the ship design stage between owners, shipyards and classification societies. He said this was especially necessary at this time “in order to produce more efficient vessels best suited for the particular trade”.

Ioannis Kourmatzis, coo, Division Europe and North Africa, DNV, took a similar line saying how important it is for all parties to liaise in the development of optimum vessels for the future. Kourmatzis pointed out shipyards need to plan ahead to be cost effective in providing a quality product. He also stressed that from an environmental point of view it is necessary for all parties to start with a clean sheet of paper, “beginning with a design of new hull lines, so the ships of the future are as efficient as today’s technology can produce”.

IACS chairman, Tom Boardley, said regulations through consultation, will lead to a strong foundation for the future. He said, governments need to liaise much more closely with shipowners, class societies and shipyards, before regulations are decide, or “even before regulators proposals are finalised”. Mr Boardley welcomed good regulation, but insisted for that to happen “the consultation has to start before positions become entrenched”.

Yasushi Nakamura, esxecutive VP, ClassNK, spoke of the “need for a connecting bridge between shipowners and class” and proposed a joint approach to r&d with yards and shipowners. Mr Nakamura said when it comes to new green technology, there is a need to prioritise the various elements that have to be adopted and there influence ship designs, and what the cost benefit analysis would reveal.

He outlined some ClassNK research projects and suggested all stakeholders to share the cost, something that interested Captain Panayiotis Tsakos and Mr Mitropoulos, founder and chairman respectively, of the Maria Tsakos Foundation which has established a Scientific Council with the aim of filling any vacuum in the broad field of maritime research.

Proceeds from the event went to the non-profit organisation, Friends of the Liberty and support the maintenance of the Liberty Museum, as well as the charities:   ARGO (In support of children of seafarers with special needs); The Mission to Seafarers; RNLI (Royal National Lifeboat Institution; Sailors Society; MDA (Muscular Dystrophy Association); and CHARA (Centre for People with Special Needs)

In parallel, with the forum, the ‘Liberty Challenge’, yacht race took place. This event, was a combination of two yachting events which have common goals to inspire people to learn from past experiences and work together for a better future. It recognized that the Liberty Enterprise and the Yacht Club of Andros have a strong historical past with a vision to keep the memories alive through educating people about the benefits of seamanship, camaraderie, professionalism and teamwork for a common goal.

The ‘Liberty Challenge’ sailing regatta, centered on the 46th Andros Yacht Club race, an event of 72 mile from Vouliagmeni Bay which starting June 21 and travelling through the night to Xora Bay, Andros and provided another unique opportunity for people to bond under the challenging environment of competitive sailing whilst also sampling the spirit of the Aegean Sea and Cyclades coastline. 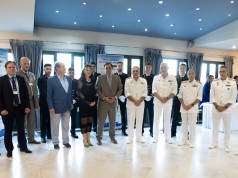 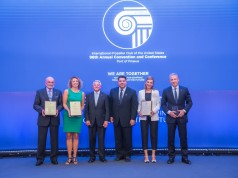 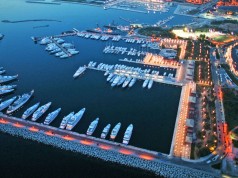 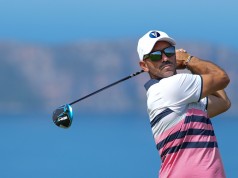 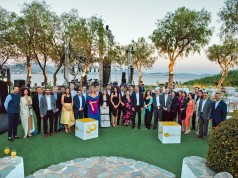 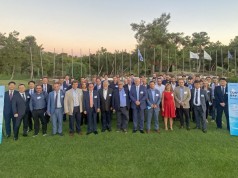