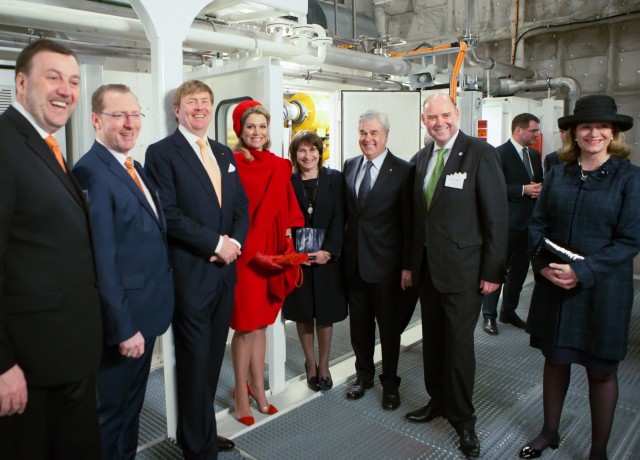 Distinguished visitors at the Port of Hamburg. The Dutch royal couple, Willem-Alexander and Máxima, were thrilled by the environmentally-friendly technology employed by Becker Marine Systems’ HUMMEL LNG Hybrid Barge.

This year for the first time the HUMMEL will be supplying mobile and low-emission power to cruise ships lying at port in Hamburg. Interest in the LNG (Liquefied Natural Gas) Hybrid Barge is thus already quite large. And a reason for Dutch King Willem-Alexander and Queen Máxima to stop by during their visit to Hamburg to be informed about the innovative project.

“A very welcome visit since we are also working together with Dutch partners on the LNG Hybrid Barge,” said Dirk Lehmann and Henning Kuhlmann, both Managing Directors of Hamburg-based Becker Marine Systems, on the occasion of the royal visit from the Netherlands. For example, the liquefied natural gas is also delivered by Shell Gasnor in gas containers via the “Gate LNG Terminal” from Rotterdam.

The royal couple, who had already visited companies in Schleswig-Holstein, was accompanied by Dutch Minister for Foreign Trade Lilianne Ploumen and a 20-member trade delegation. Cooperation between German and Dutch companies is intended to be further intensified and renewable energies and the maritime economy were among the issues being focussed on during the trip.

Prior to this, King Willem-Alexander and Queen Máxima had attended the “LNG — full speed ahead” symposium at the Hamburg Fischauktionshalle. In addition to Uwe Beckmeyer, the Parliamentary State Secretary at the German Federal Ministry for Economic Affairs and Energy and Frank Horch, Senator of the Department of Economic Affairs, Transport and Innovation in Hamburg, participating in this event organised by the Senate of the Free and Hanseatic City of Hamburg, the Royal Netherlands Embassy and the Dutch Business Support Office were numerous representatives from maritime companies.

“We can also imagine deploying an LNG Hybrid Barge at the Port of Rotterdam,” said Lehmann and Kuhlmann. The use of the environmentally-friendly ship fuel can significantly improve the air quality of the port city. Becker Marine Systems’ barge works like a floating power plant. Compared to conventional marine diesel with 0.1% sulphur content, sulphur dioxides and soot are no longer emitted. Emissions of nitrogen oxides and carbon dioxide are also significantly reduced.

Following further events and signing the Golden Book of the Free and Hanseatic City, the Dutch royal couple bid farewell to Hamburg. Born in 1967, Willem-Alexander succeeded his mother as King of the Netherlands just under two years ago. He is married to Queen Máxima, born in Argentina in 1971. The couple has three daughters.