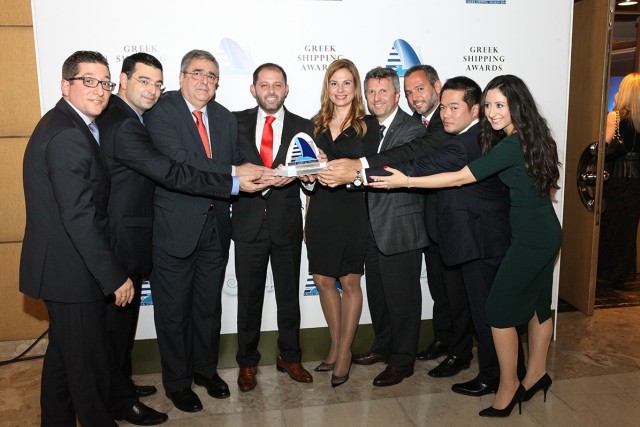 On Friday 5 December 2014 POSEIDON MED was awarded with the Technical Achievement Award at the Lloyd’s List Greek Shipping Awards 2014.

POSEIDON-MED is the first Cross European Border project in the Mediterranean and Adriatic Sea with the main scope of introducing LNG as the main fuel for the shipping industry and proposing a sufficient infrastructure network of bunkering value chain.

POSEIDON MED focuses in the Eastern Mediterranean region with five Member States (Greece, Cyprus, Italy, Croatia, and Slovenia) involved. Its ultimate objective is to prepare in detail a global plan of infrastructure development in this area, so that LNG can be widely adopted as fuel for shipping operation but also servicing additional needs of the mainland operations, the European Energy Security strategy and the diversification of Natural Gas sources.

POSEIDON-MED is co-financed by the EU, TEN-T / Motorways of the Sea. The Project is coordinated by QENERGY and comprises 18 partners among which Lloyd’s Register, OceanFinance, Naval Architecture Progress, Environmental Protection Engineering, all major Short Sea Shipping companies in the region and core ports such as Piraeus and the North Adriatic Ports.

Dr. Theodore Theodoropoulos during his acceptance speech mentioned that “This promising project is really important for the Mediterranean and Adriatic region with a wide range of benefits for many European Countries, as Greece, Italy, Cyprus, Croatia, Slovenia, Malta, etc. Among them I would like to stress the cost savings for the ship-owners, new foreign investments capital, new job opportunities at many sectors and compliance with the new regulations of Greenhouse Gas Emissions established by the European Union. Furthermore, of utmost importance are the strong synergies that will occur with top global energy players, gas producers, LNG distribution companies, engine manufactures and shipyards. The project will support the Europe’s diversification of energy supply sources – mainly from Qatar and other producers – and increase the energy storage capacity for SE Europe, converting the port of Piraeus into an energy hub of the Mediterranean and Adriatic Sea.”