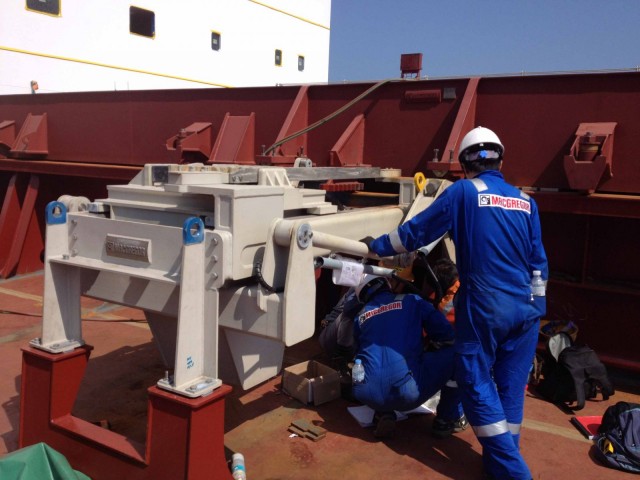 MacGregor, part of Cargotec, has announced that the first units of a 672-strong MacRack orderbook are now being installed. The units are destined for a total of 38 ships for various owners; 35 of which are for 180,000 dwt bulk carriers and the remaining three are for 87,000 dwt bulkers. Each of the larger vessels will be fitted with 18 MacRack units and the smaller vessels will each feature 14 units.
MacRack is an economical, competitive and environmentally-friendly electric-drive system for side-rolling hatch covers.  “Current levels of interest in MacRack systems strengthen our firm belief that they will become the standard system for side-rolling hatch covers,” says Torbjörn Dahl, senior naval architect for bulk ships at MacGregor.
MacRack uses variable frequency drive (VFD) technology, which delivers high torque with low speed and allows for the optimised use of electric power. “MacRack units deliver a number of advantages,” adds Mr Dahl. “They unite the ‘lift’ and ‘drive’ operations and so make separate hatch cover lifters obsolete. This reduces maintenance work for the shipowner, and the shipyard’s installation work is also simpler because fewer components need to be installed on the coaming.
“Also, unlike hydraulic pump units, there is no continuous running of motors and there is no need to warm the oil in advance, so MacRack delivers energy savings and is also not as sensitive to a cold climate as hydraulic systems,” adds Mr Dahl.

Caption: The first units of a 672-strong MacRack orderbook are now being installed; current levels of interest strengthen MacGregor’s firm belief that MacRack will become the standard system for side-rolling hatch covers.