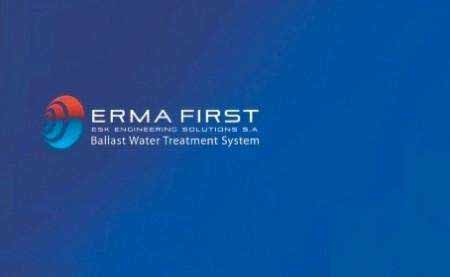 ERMA FIRST S.A. one of the leading companies for Ballast Water Treatment, is amongst the very few companies that have already received the acceptance letter from USCG. ERMA FIRST BWTS received its AMS Acceptance letter on October 11th. The ERMA FIRST BWTS is a unique and innovative system designed and manufactured using profound technology and performing high efficiency. This robust system has been proven to be compatible with global legislations and conventions, international requirements and restrictions. AMS approval is one more reward and ascertainment that ERMA FIRST BWTS has completed with success all technical challenges.

In 2012, Ballast Water Discharge Standard became a law in the US. Any vessel constructed in December 2013 or later will need to comply when entering US waters, as well as existing vessels will follow shortly after. US coast guard has published in March 23rd 2012 the final rule addressing the ‘Standards for the Living Organisms’ in Ships Ballast Water Discharged in US Waters (BWDS). The rule is in force since June 21st 2012. The new regulations will aid in controlling the introduction and spread of nonindigenous species from ships’ ballast in the waters of United States. The final rule of USCG which complies with IMO Convention 2004 literally approves ballast water management methods that prevent and control infestation and disposal of living organisms in the US waters. The AMS (Alternate Management System) Approval handed over by the USCG to Ballast Water Treatment Systems will allow ships with approved systems to reach US waters and ports.

The ERMA FIRST BWTS had provided all methods and results during land and shipboard testing in accordance with US Standards.

So far, the most challenging water conditions such as natural richness and density of organisms, high particle and sediment load, were performed at NIOZ facilities with high fidelity and the results were successful.

Soon after that, ERMA FIRST earned the AMS approval for all its models and associated filter housings, as type approved by the Hellenic Republic, Ministry of Development, Competitiveness & Shipping, Merchant Ships Inspection General Directorate, design and Construction Directorate number 4245.9/01/12 issued 10 May 2012.

ERMA FIRST BWTS is an electrolytic system which incorporates an advanced separation stage based on hydrocyclones. The separation stage of the system is a unique method of stable operation, achieving extreme sediment removal, while warranties no clogging risk. Its excellent design offers to the user minimal maintenance costs since it is consisted of no moving parts and thus requires no spare parts.  The system has been designed to offer low energy consumption in order to reduce environmental impact. It has been carefully formed for easy installment.

The above features place ERMA FIRST BWTS firmly at the cutting edge of ballast water treatment. Undoubtedly, the company stands strong in the front line of competition.