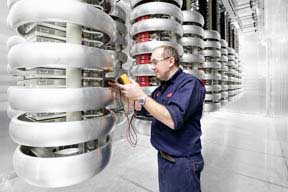 DNV is supporting shipowners and operators through the initial enforcement phase of the Maritime Labour Convention with a range of services and advise that the major port state control bodies will go beyond International Labour Organisation Resolution XVII recommendations to initially just concentrate on passenger ships and bulk carriers.

“Paris MoU enforcement will be applied to all ship types, and those considered high risk will be the target of inspections,” says Georg Smefjell, DNV Head of Section. “This includes oil, chemical and gas tankers as well as ships from ‘black listed’ flags and those with a history of deficiencies.”

Smefjell expects most other port state controls to take a similar stance, and he reminds shipowners that the ‘no more favourable treatment’ clause of the convention will mean that vessels will be inspected irrespective of flag. Documentation such as the Declaration of Maritime Labour Compliance must meet complex requirements, he says. There are also specific requirements for vessels with keel laid after 20 August 2013 which need to be included in newbuilding contracts.

Working and living conditions must be inspected and approved before a ship is certified, and this includes medical certification, qualifications of seafarers, employment agreements, wages, manning levels, accommodation and other onboard facilities. “In our experience, almost every ship operator will have to develop new procedures or revise existing ones in order to meet the requirements set out by their flag state,” says Smefjell.

DNV’s support services include training, document review, gap analysis, certification, voluntary declarations of compliance and crew manning office certification. “When it comes to MLC matters, we have been working actively on these issues since 2004 and have the great advantage of having conducted labour inspections on Norwegian ships since 2009. As the Norwegian legislation is almost identical to the MLC 2006 requirements and since we in DNV handle these requirements for more than 90 per cent of the internationally trading Norwegian fleet, we have an experience base which is unsurpassed,” says Smefjell. DNV’s professional inspectors around the world have been trained and accredited for MLC service provision.

Beyond initial compliance, the convention calls for measures that will ensure continuous improvement so Smefjell urges ship operators to remain alert to the challenges and opportunities that the convention poses.