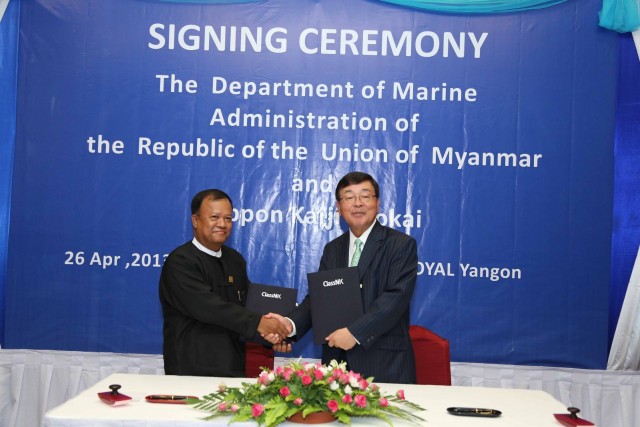 Leading classification society ClassNK (Chairman and President: Noboru Ueda) has announced that it has signed an agreement with the Government of Myanmar granting ClassNK authorization to carry out statutory surveys on its behalf. The signing ceremony took place in the Park Royal Hotel in Yangon on 26 April 2013, with Director General of the Department of Marine Administration Mr. Maung Maung Oo signing on behalf of the Government of Myanmar.

Myanmar is one of the fastest growing economies in South East Asia, and has recently seen many Japanese businesses including major shipowners expanding into the Myanmar market. As one of the world’s main producers of seafarers, Myanmar has become an increasingly important region in the global maritime industry.

In addition to this agreement, ClassNK also established its first exclusive survey office in Yangon at the beginning of April. With the establishment of this new office, ClassNK can now directly dispatch surveyors throughout the Myanmar region. ClassNK currently operates 122 exclusive survey offices around the world and is authorized to carry out statutory surveys on behalf of over 100 flag administrations.