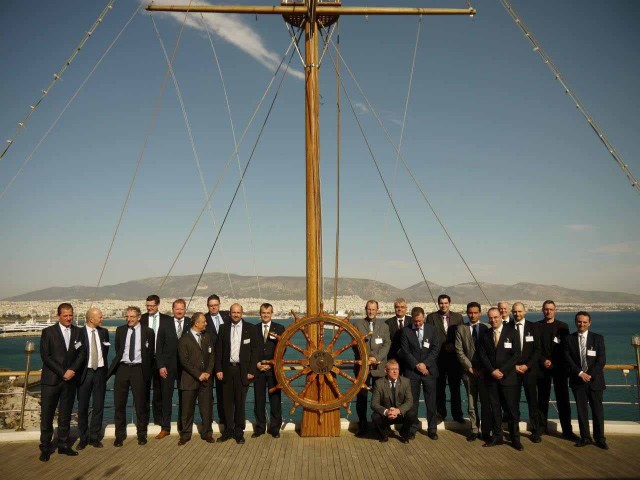 The delegation of Danish maritime suppliers returned from their visit to Piraeus with a positive feeling of the state of the Greek shipping industry. Shipowners in Greece are on the look-out for innovation and technology to improve efficiency and competitiveness of their fleet.

With 140 guests attending the ”Operational Efficiency by Technology” event in Yacht Club of Greece last week, the Danish delegation of equipment suppliers to the shipping industry were impressed with the interest and a proud host.

“The attendance testifies that Greece and Denmark are amongst the most important players in the marine sector – both in the shipping industry as well as amongst the companies supplying this industry” said the Danish Ambassador to Greece H.E. Ms. Mette Knudsen and continued that “While we are all aware that Greece is going through difficult times, and also that for both our countries the challenges to the marine sector are many and diversified, it is still a fact that the marine sector is used to sometimes stormy seas. The sector is characterised by a strong resilience to the ups and downs of the global economy. And there is no doubt that in the long run world trade will continue to grow – and Danish and Greek companies will play a decisive role in transporting the goods of that trade.”

Focusing on increased efficiency and technological possibilities in achieving a more efficient operation of the fleets Mr. Vasilis Logothetis, the Vice President of the Hellenic Chamber of Shipping followed the Danish Ambassadors lead on the need for improved performance for both increased competitiveness and environmental concerns, by stressing that “the state of the market should by no means affect the level of quality in a negative way. High standards and quality is a core responsibility of owners and suppliers as well as the other actors within the maritime industry!”

The visit by the Danish delegations was organized in cooperation between Danish Marine Group (an association of Danish maritime equipment and service suppliers), the Danish Embassy and Intra Mare in Piraeus. Mr. Mark Lerche from the Danish Marine Group says “it all about getting to talk to the right people, who understand the need for a daily optimization of the operation. The suppliers need to have a good dialogue with the operators who deal with the technical challenges and possibilities. This is the only way to innovate intelligently and deliver the needed solutions to the industry. This is why it is important for us to come down and meet face to face here in Piraeus”.

The nautical company Iver C. Weilbach & Co A/S who are a supplier of maps and nautical publications with increased focus on the digital products were one of the Danish delegation companies. The Director of Sales from Iver C. Weilbach, Martin N. Mikkelsen, was very pleased with the high number of attendees and impressed with the interest and awareness by the owners on digital products available for navigation. “We have a lot to follow up on when we get back to Denmark. But the event has been so inspiring and fruitful for us, that we wish we had arranged for more days to visit the shipowners here in Greece after our conference and networking event. But we will have to come back again” says Sales Director Mr. Martin N. Mikkelsen.

The other participants in the delegation from Danish Marine Group were:

Foto: The Danish Marine Group at the wheel, Yacht Club of Greece I Piraeus.