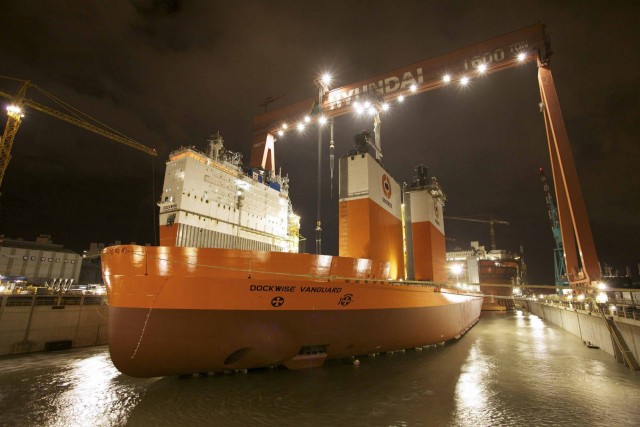 Amarcon, a member of the ABB group, today announced that it has received an OCTOPUS-Onboard order for the new build Dockwise Vanguard. This vessel is the largest and most advanced heavy lift vessel ever built. The vessel was launched in November 2012 and is currently undergoing her sea trials.
Dockwise was founded in 1993 as a merger between Wijsmuller Transport and Dock Express Shipping, making Dockwise the world’s largest and most versatile heavy transport shipping company. The Dockwise Vanguard shall be equipped with OCTOPUS-Onboard for the purpose of motion monitoring, response prediction and heavy-weather decision support during heavy cargo transportations. The vessel shall also be equipped with a three sensor motion measurement set-up. This way multiple critical locations of the vessel, for instance the cargo, can be measured and displayed on the bridge of the vessel. The OCTOPUS product line is part of ABB’s Vessel Information and Control (VICO) systems suite which incorporates a full range of automation and advisory solutions specifically for marine applications, based on ABB’s field-proven process automation technologies.

This recent appointment is the seventeenth order from Dockwise for an OCTOPUS-Onboard installation. “For Amarcon, it is exciting to deliver our decision support software to a vessel of this magnitude, that can carry anything from a ship or drilling rig, up to an entire Floating Production Storage and Offloading unit,” said Leon Adegeest, founder and General Manager of Amarcon.