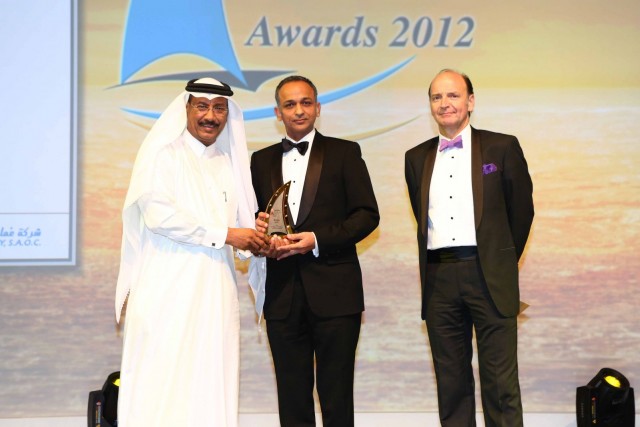 Smit Lamnalco has been recognised for its outstanding services to the oil and gas terminal industries at the annual Seatrade Middle East & Indian Subcontinent Awards in Dubai, U.A.E.

The company, which operates over 50 terminal contracts, operates and crews over 190 vessels in 31 countries and employs close to 3,000 people worldwide took the award for Marine and Offshore Services at a glittering gala dinner at the Atlantis, The Palm, Dubai. The event was attended by a ‘Who’s Who’ of nearly 1,000 executives from the region’s maritime and shipping industries.

The awards were judged by a 12-strong panel of international judges led by Koji Sekimizu, Secretary-General of the International Maritime Organization. The companies shortlisted and winners were deemed to have demonstrated exemplary levels of achievement, in technical and operational innovation, commitment to safety and quality, social and environmental responsibility, business acumen and development of human resources.

Vivek Seth, Managing Director, Smit Lamnalco Middle East and Indian Subcontinent, said: “Almost a third of Smit Lamnalco’s fleet is deployed in and around the Middle East. This area has continued to be a focus for new growth and investment, particularly in 2012. I am delighted on behalf of all the Smit Lamnalco staff and crew for recognition of their efforts in delivering safe and efficient towage and associated marine services to oil and gas stakeholders in the region.”

Seatrade chairman, Chris Hayman, said: “It is clear, especially to those of us from Europe that this region is rebounding strongly. The evidence for this is to be seen from a range of reliable indicators, from cargo volumes through the ports to the traffic levels in the Sheikh Zayed Road. The transport corridors between Asia, the Middle East and Africa, between Asia and South America and intra-Asia are all set to expand. And this region is strategically well placed to take full advantage of this new reality.”

Mr Seth added: “We are particularly pleased to accept this award in 2012, as it crowns a year of heavy group investment in the Middle East and Indian Subcontinent. This year, Smit Lamnalco secured its biggest regional contract to date – an approximately $70m a year deal which commits 11 of our vessels to support Single Point Mooring for oil export operations in Iraq.  Our regional team also secured a five year contract in Georgia and opened a new office in India, and we are setting up a new chartering operation in Qatar.”