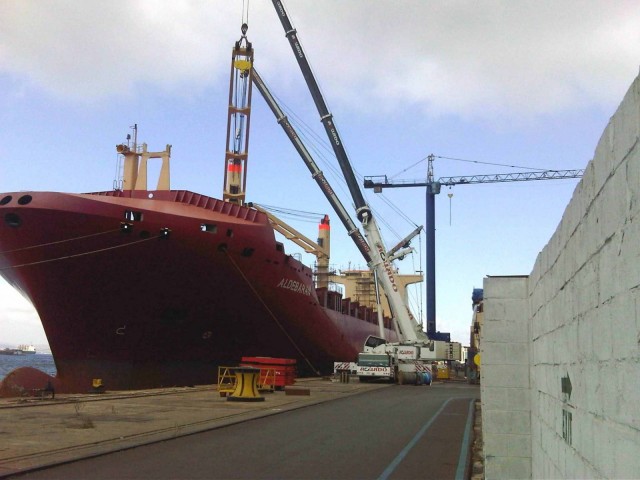 Gibdock has completed a complex containership crane refurbishment job, in a latest contract to involve a German owner. The deck crane work called for certification of strict welding procedures by Lloyd’s Register (LR), which approved all materials used.

Aldebaran, a 2008-built 2785 teu capacity containership owned and managed by Reederei Horst Zeppenfeld, underwent a multi-faceted package of works at the Gibraltar-based yard. The ship is on charter to CMA CGM and was redelivered on schedule after a 23-day project. The yard has handled a succession of vessels for German owners this year, attracting ships operating in the Mediterranean and West African trades, with owners drawn to Gibraltar in part by minimal route deviation.

“When the ship was docked, we needed to remove the three deck cranes from their foundations and transfer them ashore using two mobile cranes. One 250 tons capacity mobile was used to support the jib end of the crane while a second, 500 tons capacity mobile supported the crane housing. The shipboard cranes weighed over 50 tons each.”

Matthew Byrne, Marine Senior Surveyor, Lloyd’s Register EMEA, said:  “This was an unusual project for Gibdock, outside of the boundaries of what they are used to, working on crane housing and structures with relatively thin steel thicknesses. The owner was pleased and from our point of view it was a good job well done. It was a long job because of the detailed welding procedures. These involved a set sequence with two welders on either side welding one after the other working round the clock, 24 hours a day. This avoided thermal distortion to the pedestal foundations. The result was excellent.”

Once ashore each of the cranes was placed on two sets of wooden blocks, one to support the crane housing and the other the crane jib. Scaffolding was erected around each crane pedestal to provide a working platform for the next stage. The three crane pedestals were prepared and bevelled according to manufacturer guidelines to accept new foundations.

“The new foundation for each crane was placed on top of the pedestal and fitted, secured and welded in place, with two welders working opposite one another,” said Mr Cano. “Once tests had been carried out each crane was lifted back onto its new foundation, again using mobile cranes, and bolted into position. Refitting cranes onto their foundations with the ship afloat, subject to sea swell was also demanding.”

Richard Beards, Gibdock commercial director commented: “German containership owners continue to show faith in our yard, and we were delighted to demonstrate our ability to meet this complex challenge both on time and within budget.”