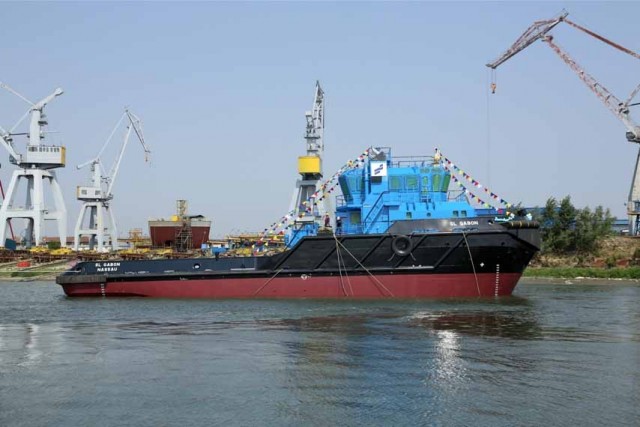 Built by Damen Shipyards Galati in Romania, SL Gabon is also the first of two newbuilds contracted for a five year period by Total Gabon to provide support in the offshore oilfields and to assist tanker operations at the onshore terminal of Cap Lopez, at Port Gentil, Gabon. The second tug, SL Libreville, is due for delivery next month.

The Total Gabon contract renews a longstanding partnership between the oil major and Smit Lamnalco.  The newbuildings replace two older Damen-built vessels, and join the existing tugs Smit Manji and Smit Ozouri, built in 2007. For Total Gabon, the latest renewal extends a relationship in Gabon that can be traced back through SMIT to 1998.

“As well as symbolising the ongoing trust placed in us by our customers through our integration, the delivery confirms our willingness to commit to building new vessels for energy majors operating in promising markets,” said Mr Koornneef. “Given Port Gentil’s remote location, it is critical that marine support services are robust and reliable.”

Smit Lamnalco operates with a locally-established company Smit Lamnalco Gabon, which reports to the company’s Regional Director. This entity recently relocated to new offices closer to Total Gabon’s logistics base in Port Gentil, to optimise support to Total Gabon.

“We emphasise localisation through partnerships with local companies, employment of local staff, crews and subcontractors,” said Mr Koornneef. “This benefits all stakeholders, as it recognises local networks, culture and circumstances. Gabon is a strong market for Smit Lamnalco and a key location in our long-term partnership with Total to support our customer’s strategic goals in West Africa.”