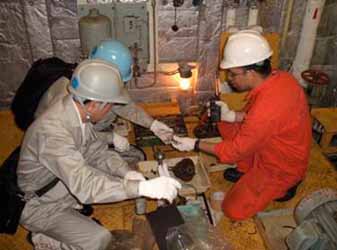 Leading classification society ClassNK officially announced that its register had surged past the 200 million gross ton mark on 28 May 2012. ClassNK Chairman and President Noboru Ueda announced the historic achievement at a party celebrating the 50th anniversary of the establishment of the London office, which was attended by many of the leaders of the maritime community, including IMO Secretary General Koji Sekimizu and IMIF Chairman Jim Davis CBE. This unprecedented achievement makes ClassNK the world’s first class society in history to have more than 200 million gross tons on its register.

Speaking during the party, ClassNK Chairman and President Noboru Ueda recognized the role of the greater maritime industry, as well expressed his thanks to ClassNK’s clients and partners around the world, saying: “This achievement highlights the incredible growth of the world maritime industry over the past decade, as well as the undeniable importance of the shipping and shipbuilding industries to the continued growth and development of the global economy, and we could not have achieved this historic milestone without the deep trust and continuing support of the global maritime community”.

Mr. Ueda also tied the society’s ongoing success to its increasing internationalization and growth around the world, noting: “Fifty years ago, ClassNK opened our very first office outside of Japan here in London, and this year we will celebrate the opening of our 100th office outside of Japan. Our unprecedented achievement of having 200 million gross tons under class is a testament to our growing presence around the globe, and we will strive to provide even better service to our clients and partners around the world in the years to come”.

According to Mr. Ueda, the achievement of the 200 million gross ton milestone represents the accomplishment of one of ClassNK’s main strategic goals: “In order to better chart our development and better respond to the needs of a changing maritime industry, ClassNK established “Global Approach 200[i]”, our first medium-term business plan in 2011, with the goal of breaking 200 million gross tons by the end of this year”.
“We are truly honored to have accomplished this goal within such a short period of time, and this success reflects our tremendous dedication and efforts to meet the evolving needs of the maritime industry, and ensuring safer and greener seas”.

Despite the importance of this achievement, Mr. Ueda emphasized that ClassNK would not rest, adding: “Roughly 20% of the world’s commercial tonnage relies on ClassNK and our services, and we are committed to exceeding the expectations of the maritime industry. We will continue to dedicate ourselves to serving the industry as a whole, and providing the very best classification services, technical support and timely advice possible”.