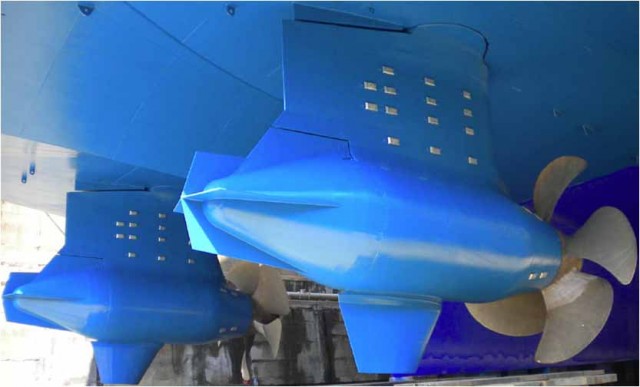 ABB, the leading power and automation technology group, has announced that

improved by more than two per cent.

The revised fin structure receives water flow from the propeller at a new, less acute angle, and its

new fin shape and X-tail. The modifications to Azipod were completed during her drydock in May

2011. Her sailings from May to September witnessed the benefits when compared to a sister vessel

and her previous operational portfolio: more than 2 percent in hydrodynamic efficiency improvement

Based on the positive result from the test, ABB will now include its new features in new Azipod XO

At the beginning of this year ABB together with Eniram introduced Azipod Dynamic Optimizer (ADO),

a software tool which optimizes the Azipod toe angle. The tool has further improved unit efficiency

and initial results from the trial installation on Holland America Line’s Noordam indicate that 1.5

percent savings may be achievable on this vessel.

have been made during that time. However, from the hydrodynamic point of view the system still has

a lot of potential. More new ideas will be studied, tested and applied to improve ship fuel efficiency”

When the Azipod propulsion system was first introduced to the cruise market in 1990s, around an

eight per cent rise in efficiency was recorded compared to existing ships, in terms of shaft line

efficiency. After that, step by step improvements were made to the Azipod shape, resulting in about

another seven per cent efficiency improvement. Two years ago, when ‘next generation’ Azipod -

this to the recent improvements, Azipod hydrodynamic efficiency has totally been improved by more

than 12 percent compared to the first cruise vessel application.

Royal Caribbean International and Azamara Cruises. “Any improvements we can make on fuel

efficiency will serve us well for future operational costs.”

“Azipod is one of ABB’s most recognized products, denoting the company’s energy efficient solutions

for marine applications and offering up to 20 percent in energy savings. However, the pursuit of better

To date, over 100 vessels have been equipped with Azipod propulsion units and more than 240

Azipod units have been delivered or are on order, accumulating about seven million reliable operating