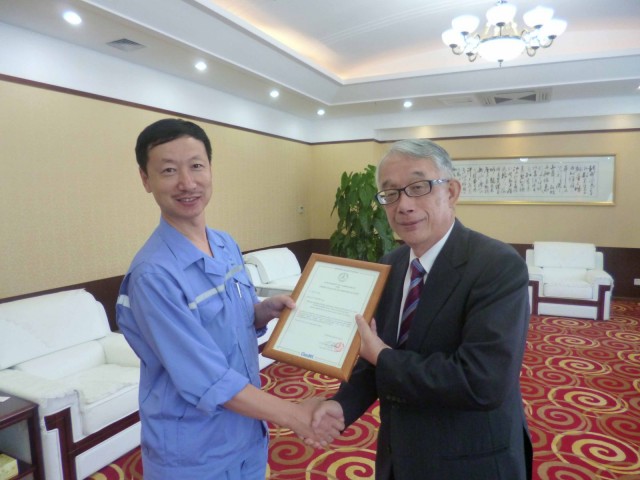 Leading classification society ClassNK (Chairman and President: Noboru Ueda) announced that it has issued the world’s second Statement of Compliance to Dalian Shipbuilding Industry Marine Service Co., Ltd. (CEO: Sun De Lin; Changxing Island, Dalian) confirming that it is in compliance with the Hong Kong International Convention for the Safe and Environmentally Sound Recycling of Ships, 2009.

The Dalian Shipbuilding Industry Marine Service Co., Ltd plant (Changxing Island) was established as a repair yard, but with ship recycling being carried out on its 500,000m

The Dalian Shipbuilding Industry Marine Service Co., Ltd developed its Ship Recycling Facility Plan (SRFP) in preparation for the incoming convention. An SRFP is required by the competent authorities when authorizing a Ship Recycling Facility to be in compliance with the convention. As an independent third party organisation, ClassNK confirmed that the SRFP met the requirements of the convention, and that the facility is carrying out recycling according to its SRFP.

This marks the world’s second issuance of an SOC for the Hong Kong Convention; the first issued to Jiangmen Zhongxin Shipbreaking & Steel Co., Ltd. (CEO Liang Zhuo Quan) by ClassNK in December 2012.

2 site and repair use dry docks, and an estimated annual recycling capability of 1,000,000LDT (light displacement tonnage: preliminary calculation standard for determining the selling price of a scrapped vessel), it has one of the largest capacities of China’s ship recycling facilities.