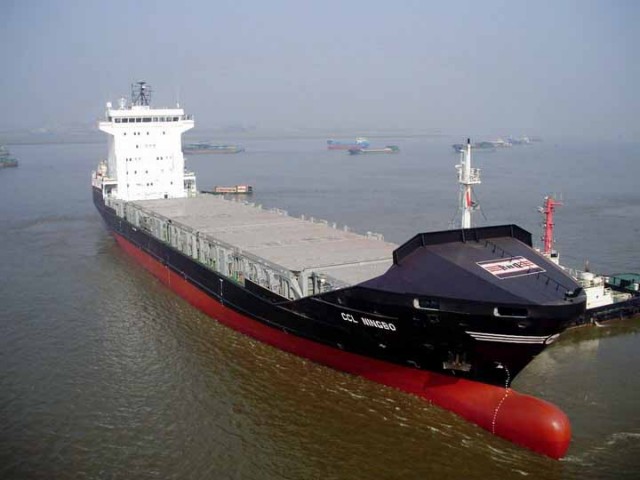 Chinese shipowner Centrans (Tianjing) Ocean Shipping has received EEDI compliance certificates for two 180,000 dwt newbuildings, an achievement it reports as being a first in the Capesize segment globally. The bulk carriers are each powered by a single MAN B&W 6S70MC-C8.2 low-speed engines built by Dalian Marine Diesel, and the vessels were built at QingDao Beihai Shipyard in Eastern China.

Ole Grøne, Senior Vice President – Low-Speed Promotion & Sales – MAN Diesel & Turbo said: “This is an interesting project that shows that even our mechanical engines are capable of satisfying EEDI requirements. That said, I would add that our electronic ME-C engines are capable of delivering even better EEDI values.”

2 a ship may emit per transported ton and nautical mile travelled that all newly built ships must meet from 2013. The EEDI aims to reduce fuel consumption and resultant CO2 emissions not only through engine technology measures, but also through changes in the ship’s geometry. The Centras newbuildings saved more than 3 tons of fuel per day compared to the standard design the company had previously used in designing its Capesizers. The resultant EEDI value was calculated as being 5.38% lower than the reference value required by the International Maritime Organization in its EEDI legislation due to come into force next year, a result Centrans reported as it being “very satisfied” with. The vessels received their EEDI compliance certificates from Lloyds Register in late 2012.

The Centrans Ocean Shipping Logistics Group operates multiple domestic container trade routes within the People’s Republic of China, as well as internationally to Japan, Hong Kong, Singapore and other, Asian destinations employing a fleet of some 60 ships. The Group also operates other general cargo lines, including the transportation of a large amount of bulk and break-bulk cargo internationally to, among other countries, Japan, Korea and Russia, and has its own global shipping network.